Start a Wiki
Mystery Science Theater 3000 (or MST3K) is the television show that most popularized the concept of movie riffing. The series began on a local Minneapolis station, expanded to cable television through Comedy Central and The Sci-Fi Channel, and is the precursor to RiffTrax.

At its core, the show is about a guy and his friends watching and making fun of bottom-of-the-barrel movies. In the case of MST3K, the concept was further refined into a hapless guy in a blue-collar job who has been stranded in space aboard The Satellite of Love. His bosses, two mad scientists who force him to watch these horrible films, are attempting to find the one that will break the human spirit and thus aid them in taking over the world. The trapped victim has his own weapons, however: an inexhaustible sense of humor, and several robot friends who help him keep his sanity by assisting him in making fun of the movies, thus foiling the mad scientist's plan.

Ideas for the show came from the stand up comedy routine of Joel Hodgson. The routine was basically a prop comedy routine. He was doing the routine in the Twin Cities area when he and a friend discussed a possible TV show on the local UHF station KTMA. Debuting in 1988, Joel was the host. They established many elements of the show during this time. These fixtures included, the bots, the theater doors, and the invention exchange. The success of the show can be attributed somewhat to the underground network of tape trading. However, still many local viewers watched. From time to time, the show would play telephone messages from fans, negative and positive.

With the start of two new comedy channels on cable in 1989, there was a scramble for material. The Comedy Channel picked up MST3K as its flagship series. With this move, the series went from an improvised style to a rehearsed, scripted production. Other changes were a new set for the SOL and the Mads, with their new digs dubbed "Deep 13". Also, the role of Gypsy was taken over by producer Jim Mallon.

Josh Weinstein left the show after the first season over creative differences (apparently exacerbated by the fact that he was only 19 years old and the rest of the cast was in their early 30s). The performance of Tom Servo was taken over by Kevin Murphy and Dr. Erhardt was replaced with a new character, TV's Frank, played by Frank Conniff. By the third season, the show had become a ratings success and a critical darling. Comedy Central had also begun the annual Turkey Day marathons.

In 1993 Joel Hodgson decided to move on to new projects. He quoted that he had to "hang up his red jumpsuit and move behind the camera". It was decided to continue the show with head writer Michael J. Nelson starring as "Mike Nelson". The trade-off occurred during the middle of the fifth season, with Mike arriving and Joel leaving in episode 512 - Mitchell.

Frank Conniff decided to move on at the conclusion of also left in Season 6 and he was replaced for the truncated Season 7 with Dr. Forrester's mother, Pearl Forrester (Mary Jo Pehl), a character who had been introduced previously.

In 1996, Comedy Central decided to cancel MST3K, citing flagging ratings. The show's staff began shopping around other networks that might be interested in picking up the show.

In the summer of 1996, while MST3K was between networks, Mystery Science Theater 3000: The Movie was released.

The renewed show began running on The Sci-Fi Channel in 1997, as fans were glad that the show was saved. However, many changes occurred. Trace Beaulieu left the show and the character of Dr. Clayton Forrester was gone and, as it seemed, Crow was, too. However, problems were solved. Mary Jo Pehl reprised her role as Pearl Forrester to succeed as the main villain. A new cast member named Bill Corbett took over the voice of Crow. The show's format changed a lot. It was set a few centuries into the future where Crow's voice chip has changed and creatures known as The Nanites infested the ship. Pearl had two assistants on her hands, bumbling Professor Bobo (played by Kevin Murphy) and Brain Guy (played by Bill Corbett).

(Editor's Note: It is appropriate to include these seasons and episodes on this wiki as it features the same lineup of main riffers, Mike Nelson, Kevin Murphy, and Bill Corbett, as RiffTrax, and therefore has a much more direct impact on the current product than any other time of MST3K.)

In November 2015, Hodgson launched a successful Kickstarter campaign to fund a 13 episode revival of the show. Netflix optioned the newly funded project and in November 2017 it was announced the it had been renewed for a second season, which will feature 6 new episodes.  The new show features Jonah Ray, Felecia Day and Patton Oswalt. Kevin Murphy and Bill Corbett have reprised the roles of Bobo and Brain Guy in cameo appearances. Mike Nelson has declined to be involved. 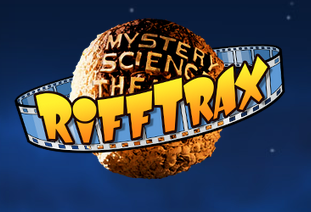 MST3K Monday is a series of classic MST3K episodes released at RiffTrax.com starting in November 2015. The inaugural releases were The Final Sacrifice and The Pumaman, both of which featured the prinicpal RiffTrax lineup of Mike Nelson, Kevin Murphy and Bill Corbett. Episodes featuring Joel Hodgson, Trace Beaulieu, and Josh Weinstein will be made available as well. The releases will include new introductions by Mike Nelson, Kevin Murphy or Bill Corbett.

Retrieved from "https://rifftrax.fandom.com/wiki/Mystery_Science_Theater_3000?oldid=12389"
Community content is available under CC-BY-SA unless otherwise noted.