Nicolas Cage (born January 7, 1954) is an award-winning American actor best known for his often questionable movie roles and unusual over-reacting to everything. He got his start in films with help from his uncle Francis Ford Coppola and is known for appearing in various blockbuster productions. Cage won an Academy Award for his performance in Leaving Las Vegas.

He has appeared in films such as Raising Arizona, Moonstruck, Vampire's Kiss, Wild at Heart (with Willem Dafoe), Amos & Andrew (with Samuel L. Jackson and Brad Dourif), Michael Bay's The Rock, Con Air (with John Malkovich and Danny Trejo), Face/Off (with John Travolta), Joel Schumacher's 8MM, Bringing Out the Dead (with Tom Sizemore), Gone in Sixty Seconds (with Angelina Jolie and Vinnie Jones), Windtalkers (with Christian Slater), National Treasure (and its sequels), Bad Lieutenant: Port of Call - New Orleans (with Val Kilmer and again with Dourif), Kick-Ass, Season of the Witch (with Ron Perlman), and Drive Angry (with William Fichtner).

Cage and his performance in The Rock are referenced briefly in Mystery Science Theater 3000's Experiment 902 The Phantom Planet. His line from The Wicker Man referring to "...A shark or something?" has become a favorite running gag of the RiffTrax team. 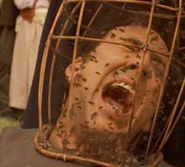 Appearing in The Wicker Man

Appearing in NEXT
Add a photo to this gallery
Retrieved from "https://rifftrax.fandom.com/wiki/Nicolas_Cage?oldid=12010"
Community content is available under CC-BY-SA unless otherwise noted.