Powers Boothe (born June 1, 1948, died May 14, 2017) was an American television and film actor who has appeared in various motion pictures and telefilms such as Guyana Tragedy: The Story of Jim Jones, Southern Comfort, By Dawn's Early Light (with Glenn Morshower), Rapid Fire (with Al Leong and Henry Kingi), Tombstone (with Val Kilmer), Blue Sky (with Tommy Lee Jones), Nixon (with Anthony Hopkins), U Turn (with J Lo), Frailty, the Sin City films (with Bruce Willis), MacGruber (again with Kilmer), and Guns, Girls and Gambling (with Christian Slater and Gary Oldman). He has worked with the likes of filmmakers such as Walter Hill, John Milius and John Boorman.

He also had portrayed the title role on the '80s television series Philip Marlowe, Private Eye and had recurring roles on Deadwood (with Brad Dourif and Pasha D. Lychnikoff), 24 (with Kiefer Sutherland), Nashville and the mini-series Hatfields & McCoys (with Tom Berenger) and To Appomattox.

Boothe has also done voice-overs for cartoon shows such as Justice League and The Looney Tunes Show as well as for video games such as Area 51 and Hitman: Absolution. 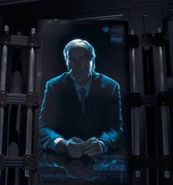 Appearing in The Avengers
Add a photo to this gallery
Retrieved from "https://rifftrax.fandom.com/wiki/Powers_Boothe?oldid=11987"
Community content is available under CC-BY-SA unless otherwise noted.