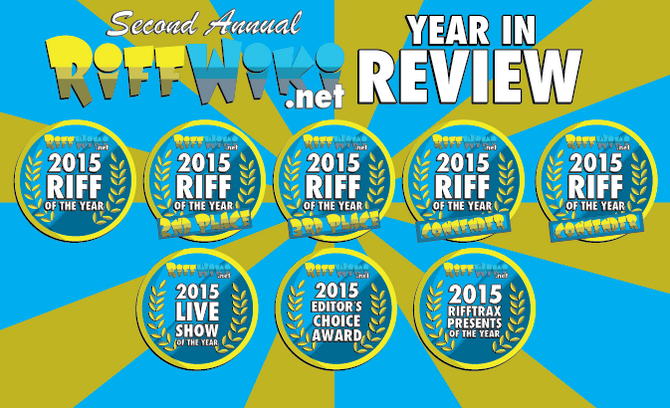 Well, another great year at RiffTrax has come and gone. Before we launch headlong into the future, let's take a look back at what can arguably be the best year in RiffTrax history, and hand out the awards for the Second Annual RiffWiki.net Riff of the Year, Live Show of the Year and (NEW for 2015) RiffTrax Presents of the Year.

BUT BEFORE WE DO THAT, I want to remind everybody that Mystery Science Storybook: Bedtime Tales Based on the Worst Movies Ever and Night of the Living Storybook, Part One: No Movie is Safe are available on Amazon for the low low price of $3.99 and $2.99 respectively. They are my own original, fully-illustrated parodies of movies from both MST3K and RiffTrax, including Manos: The Hands of Fate, Harry Potter, Twilight, Birdemic, Time Chasers, The Final Sacrifice, The Guy From Harlem, Cool as Ice, Hobgoblins, The Pumaman, Road House, This Island Earth, Casablanca, The Room, Julie and Jack, Rollergator, House on Haunted Hill, Incognito Cinema Warriors XP, Batman and Robin and Santa and the Ice Cream Bunny! That's my shameless pitch. ONTO THE RIFFS!

Wonder Women - Yeah, you'd THINK that this was gonna be some weird, 70s never-quite-made-it live action Wonder WOMAN movie, and that's what I thought at first as well. But no. This movie has nothing to do with the warrior princess. It has everything to do with an exotic island off the coast of Manilla and very long, very strange car chases. I had to watch it three or four times before I was certain nobody was actually harmed during the making of the movie. ...and honestly, I still don't know if I believe that, or even if everybody in it were aware that they were in the movie. And just like The Wizard of Oz before it, the first entry of the year left enough of an impression for it to get contender status in our Riff of the Year competition.

The Dark Power - This was the first of two Lash LaRue movies released by RiffTrax in 2015, and believe it or not, it's actually the more bizarre one. Yes, I know, many of you are saying “Alien Outlaw was weird as hell!” And yes, true, but Alien Outlaw had at least SOME sense of coherence. In the Dark Power, I gotta be honest, I don't know what the hell was going on. All I know is there is an Ancient Indian Burial Ground and that's all. But, in retrospect, what else do you really HAVE to know when you hear the words “ancient Indian burial ground.”

Kiss of the Tarantula - So let's see... So the daughter of a mortician uses a tarantula to give her mother a heart attack, then when she grows older she uses tarantulas to get revenge on her enemies, and then she buries her sexually abusive uncle alive. Between that and it looking like it was shot on the same set as The Deadly Bees, I can't see why anybody would think that would be silly or even mildly distasteful.

Alien Outlaw - Between Lash LaRue's non-use of the whip and a pants-less faux-Pocahontas, the aliens really have their work cut out for them. It's never really explained why they are there... and come to think of it, hardly ANYTHING that happens in this movie is ever explained to anybody's satisfaction, BUT! But it has the hands-down funniest joke of the year when Mike, Kevin and Bill all pretend to be faux-Pocahontas, her ex-husband and the motel operator. I never, ever get tired of that.

Teenage Mutant Ninja Turtles - As 2015's sole MP3 commentary, Mike, Kevin and Bill make the seemingly Herculean task of actually syncing it to a movie absolutely worth it. (Apologies to everybody who doesn't like syncing, but really! IT'S NOT THAT HARD! One, two, three, PAUSE, then UNPAUSE! DONE! There, I said it.) This movie was voted by RiffTrax fans as “The Worst Movie of 2014,” so it only made sense to give it the ol' RiffTrax treatment in 2015. I had sworn I was never gonna see this movie because I didn't want to wreck my image of the Ninja Turtles. But seeing it with the RiffTrax is a whole different situation, and I have to say that I thoroughly enjoyed it.

The Hideous Sun Demon - This charming little entry from the Public Domain feels like something that could have been done in 2009 along with Voodoo Man, Missile to the Moon, Reefer Madness, House on Haunted Hill, Carnival of Souls, Little Shop of Horrors and Planet of Dinosaurs, but I'm glad there's still some fun stuff to go back to in this department in 2015. Usually when something is in the Public Domain, there's a very good reason for it, and Hideous Sun Demon does not disappoint. Lots of wandering, lot's of vague BS science, and a terrible monster in a really terrible costume. It's a great, by-the-numbers black-and-white horror movie that just wasn't done very well, and Mike, Kevin and Bill have a field day with it.

The Incredible 2-Headed Transplant - Forget about crimes against God and Science, this movie's biggest crime is against the institution of American filmmaking. It's really hard to imagine how a movie about a murderer getting his head grafted onto the frame of a still-living village idiot ever got made, and then got made so poorly that anybody who saw it would say “there's no way we can release this film, it'll ruin the reputation of everybody in it! Including CASEY EFFING KASEM! How did we even get him to do this turd-burger of a movie, anyway? And somebody get him his g**d*** pictures for f***'s sake!” Yeah, this one was a hanging curveball that the guys just knocked clean out of the park. I was surprised it didn't rank higher in the Riff of the Year competition, but then I remembered some of the movies it had to contend with, and in comparison to those, The Incredible 2-Headed Transplant looks like Star Wars: The Force Awakens.

Radical Jack - It pains me to know that the year 2000, the year I left home to join the U.S. Army, is now a nostalgia year, with the subsequent years gaining ground. This was brought home in full force when I realized how dated Radical Jack looked, felt and sounded. The whole thing just reeks of late 90s/Early 2000s, and the fact that this is detectible is very disturbing. Another disturbing factor is it's relationship with the MST3K classic Time Chasers, having been made by the same production “studio” and shot in many of the same locations. GO TO HELL CITIZENS AND OFFICIALS OF RUTLAND AND WEST RUTLAND, VERMONT! And believe it or not, Billy Ray Cyrus ISN'T the worst actor in this weird hybrid of Road House, McBain and some weird third film I don't know about yet. That honor goes to the guy who played “Sheriff Neil.” His reading of “son, if you know what's good for you, you will pack your things TONIGHT and get our ASS on the next bus out of town” alone wins him the Academy Award for “Worst Actor, Not Just in Radical Jack, but of All Time.” This entry did VERY well in our Riff of the Year competition, earning it contender status in the final tally.

To Catch a Yeti - Everybody likes to talk about Fun in Balloon Land being the weirdest thing they've ever seen. While I agree that it's weird, at the end of the day, it's just parade footage. I would dare argue that To Catch a Yeti is by far the weirdest thing every riffed by RiffTrax. It takes FiBL out of the weird-mobile, beats it the hell up, gets in the driver's seat and speeds off into parts unknown. You have Meat Loaf as Big Jake Grizzly hunting a anime-eyed yeti while in the employ of a member of the Hitler Youth. Yeah, you read all that right. It was just... beyond bizarre, to say nothing of the green screen train station and yeti-wang jokes. This one was a keeper to be sure.

RiffTrax Presents: Warning from Space - Matthew J. Elliott and Ian Potter ARE BACK with this thoroughly enjoyable Japanese sci-fi disaster piece. I usually don't care much for dubbed foreign films because I find them very difficult to keep up with, but this one is the rare exception that is so weird tht it requires multiple viewings to get it's full potential. It has, by far, my favorite alien invaders in all of RiffTrax (and MST3K for that matter. Yes, they even outdo Trumpy from Pod People.) And the riff by MJE and IP (initials save time AND are super cool, see,) is the team at their very finest. This one got my personal vote for RiffTrax Presents of the Year.

RiffTrax Live: The Room - Wow. How crazy was this? Six years ago, who would have ever thought that Tommy Wiseau would agree to RiffTrax riff his masterpiece at their flagship live event? I honestly thought it was something we would never, ever see. When it was announced, my head LITERALLY EXPLODED! ...wait, I guess not LITERALLY, BUT STILL! We even got to talk to Tommy about the situation, and he was very forthcoming. This was part one of The Crappening and an awesome way to kickoff the RiffTrax Live season.

Rock 'n' Roll Nightmare - 2015 really was the Year of Weird in Ye Olde RiffTrax Towne, and the winner of third place in our Riff of the Year competition is no exception. A rock band goes out to a cabin to record an... album? I think that's what they were doing, hard to tell with the non-stop boning and demon attacks, which ended in the climactic battle between good and evil! ...oh you didn't know? Yeah, good was represented by Jon Mikl Thor (don't worry, I had never heard of him before either,) and evil was represented by a barely mobile devil puppet. And if you think THIS puppet was terrible, wait until you see the one that stars in the 2015 Riff of the Year. But you have to continue onto Part Two to find out what that is...
Retrieved from "https://rifftrax.fandom.com/wiki/RiffWiki.net_2015_Year_in_Review?oldid=10010"
Community content is available under CC-BY-SA unless otherwise noted.